If you felt a breeze this week, I should apologize. That was me, my thoughts spinning as hard as a Cat4 Hurricane.

As an author, I sometimes read other books and think "Wow, I wish I could write like X or Y." But as I wrapped up a collection of short stories this week, it occurred to me that I never will. Anymore than Stephen King can write like Ernest Hemmingway. To finally snap myself out of it, I planned out a new series and told myself to STFU and concentrate on writing like me. Because that's all I've got to work with and I should rock the hell out of it.

My publisher, All Chaos Press, has released a formal announcement identifying the start date of Wenebojo and the technology company that will be working with them to bring the Storytelling to everyone. The company that was chosen to be this integral collaborator is IBM. Wenebojo is a story-based streaming service where you can more fully immerse yourself in your favorite genres, from romance to sci-fi. Learn more HERE.


Zsolt Molnar is a fun-loving, fast-fighting, one-night-stand kind of lover and fighter in the up and coming Bear Knuckle Brawler league. He’s always been the biggest and strongest fighter around and he’s managed to go through his entire thirty-five years unchallenged. But on his way for a six-month training in the mountains of North Carolina, he accidentally hits a bobcat with his car. Call in veterinarian Dr. Romy Richardson.

Thirty-two-year-old Dr. Romy Richardson is at the end of the line, emotionally. Like the cat poster in her office, she has tied a knot and is holding on for dear life. After five years in the field and over ten in animal rescue, she’s buried too many of her clients to feel good about what she does. So, when she sees a listing for a rehab bobcat facility in North Carolina, she jumps at it. What she didn’t count on were the huge bear, leopard, and jaguar shifters roaming the streets of Silver Fells.

Can the man with boundless optimism and energy help inspire the exhausted and hopeless veterinarian? Working together can the Budapest Brawler and the Vet rehab tiny Mrs. Claws Bobcat? Or will losing another patient send Romy into a tailspin?


“Oh, don’t let her size fool you. An eight-pound cat will take on a two-hundred-pound human if you corner her. These little guys have a lot of muscle, claws, and very sharp teeth to work with.”

Zsolt held up his hand, imagining his bear paw. “I guess. But when I think of my paws and six-inch claws, she seems puny in comparison.”

“Cat’s don’t fight the way other animals do. They will always choose to run first. They will strike at their prey from above. Especially a cat the size of Mrs. Claws here. She’s a predator but also prey. If an eagle decided to soar down and take her as a snack, there’s not much she could do about it.”

“I hadn’t really thought about it like that.” One corner of Zsolt’s mouth kicked up in a tired grin as he took another sip of his coffee. “Grizzlies are apex predators. Not much gets in their way.”

“I bet you a sharp swat by her claws across your nose would make even your bear think twice about a bob-sized snack.”

Zsolt laughed at the image. “Luckily, I’ve never been that hungry.”

The moment between them stretched out. Grew. Like warm taffy at the beach, something drew them together. Inviting him to stay when he knew he should leave.

Only 99c (seriously, that's less than the cost of a cup of coffee at any reputable place!!) 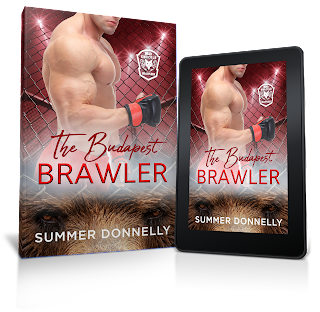